Is Kava Safe for Children? 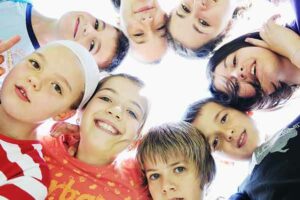 This is a question we’ve been asked more times than we have Kava plants. Is Kava safe for children? Instead of first offering an opinion, let me first offer a few statistics:

– Kava has been prescribed safely to kids in Europe for decades (1).
– Many families throughout Oceania allow their children to consume Kava.
– Kava likely affects children and teens the same way it affects adults.
– Couldn’t find long-term effects reported in children who consume Kava.
– In Germany, Kava is often prescribed to children for anxiety. (3)

This isn’t to say that we advocate starting to give Kava to your kids or your teenagers. As with everything we share here, it’s best to get an informed doctor’s opinion regarding Kava. Anyone can ask any doctor about Kava, but not every doctor is familiar with Kava beyond a few paragraphs they read in a medical journal or on WebMD. So, to get to the heart of the matter, instead of searching Google for hours for articles or clinical trials regarding children and Kava use (I found none despite my hours of searching), I decided to ask friends who allow their children to consume Kava, their kids, and the children’s doctor’s. I also spoke with one family who has strict rules about not allowing their kids to ingest any Kava until they’re 18 years of age.

First, let’s look at recommendations are for dietary supplements being given to children under the age of 18 overall. Kava is a dietary supplement, and has been used safely for thousands of years, which includes use by both adults and children throughout Oceania. But if we take a look at “5 Things To Know About Safety of Dietary Supplements for Children and Teens” by the National Center for Complimentary and Integrative Health, we find this key point:

Parents should be aware that many complementary health products, including dietary supplements and herbal medicines, have not been tested for safety or effectiveness in children. Because children’s metabolism and their immune, digestive, and central nervous systems are still maturing, side effects can differ from those seen in adults. This is especially true for infants and young children.

Nearly 12 percent of children (about 1 in 9) in the United States are using some form of complementary health product or practice, such as dietary or herbal supplements.

To summarize the 5 points regarding kids taking dietary supplements, we find this:

The takeaway from this, in my eyes, is summed up in their last sentence; “It’s important that parents talk with their child’s health care provider about any complementary health approach that is being used or considered, and parents should encourage their teenagers to do the same.” In other words, if you choose to give dietary supplements of any kind to anyone under 18, you’ve got to be smart about it. Do some research, look for studies or articles that may have evidence for children (they’re usually non-existent), and remember that everything in moderation, no matter what it is.

Having said all of that, let’s move on to the actual discussions I had with families who have Kava deeply embedded in their culture and often; their daily diet. I was surprised at how varied it was for the 4 families I interviewed, as well as the 5 children I spoke with, and the 2 doctors (both from Hawaii) whom I spoke with as well. There was no “across the board” definitive answer, and the jury is still out even with parents who allow their children to consume Kava from a young age. Both doctors, without having specific reasons that link Kava to any kind of permanent damage to kids, unanimously said that they both advise parents not allow children to consume Kava. But it’s not because of any specific dangers associated with Kava and kids, it was simply because they both felt that in developing systems, there could possibly be a greater danger of Kava consumption in children, simply because they’re children. They both also agreed that if parents want to give their children Kava, that it’s best to wait until at least 14-15 years of age.

Now, let’s look at Moya and her two daughters. They live on the Big Island, nestled in a quiet hill, with several acres of land where she grows a wide variety of plants for medicine and for consumption. Vegetables are kept behind fences to keep out curious creatures, while the Kava plants grow freely throughout the property. Moya’s children are 8 and 11. They are two of the sweetest, most well-adjusted children I’ve ever met. (Let’s call the 11 year-old Katy and the 8 year-old Sarah). Speaking with the 11 year-old was fascinating because it was like talking to a mini-adult. Katy sat with us on Moya’s wraparound porch the entire afternoon, adding quips and comments whenever her attention wasn’t on her remote control buggy. (That same buggy would bring us small treats every so often, with the buggy operator nowhere in sight!) Moya interacted with her as if she were a mini-adult, respecting her opinions, and listening to what her daughter had to say.

We spent an afternoon enjoying “shells” (cups) of Kava, while discussing Kava. We discussed practices in some parts of Europe (France, Spain), who allow their children a small amount of wine with their dinner. Parents are always very cautious, limiting the intake to just a quarter cup or so when it comes to their kids. It was no different than how Moya shared of a shell of Kava with Katy. Each shell contains about 1/2 cup of freshly-prepared Kava from fresh roots of Nene Kava (a mild strain, with very pleasant, sociable effects) harvested that same day. (There is truly no comparison to freshly-ground fresh Kava roots for me – it’s like nectar from heaven!)

She only gave Katy one cup, even as we passed onto our second, then third, and then fourth shell, Katy didn’t seem to mind, and was happily nursing her single shell. She was very familiar with this routine, and didn’t even try to ask for more Kava. Moya said she’d started giving Katy Kava when she was just 9. She wasn’t suffering from any anxiety, she wasn’t sharing Kava with her child because she was trying to fix something, or to help her sleep better. Kava is simply part of their culture, part of their history on the island, and sharing that is way to bond with her daughter and to share part of who they are as Hawaiians. Many of us tend to put so much focus on the Benefits and Side Effects of Kava, we often forget that many people don’t specifically consume it for a specific benefit. Many simply consume it because it’s part of a culture or tradition, and it’s a way to stay connected with that heritage or tradition. I really like that, and can see how this simple act is another way for this parent to bond with her child.

Since we were discussing whether or not Kava is safe for children, we were keenly aware of the effect it was having, if any, on Katy. It was extremely interesting to see some very tangible effects. Katy got a little more mischievous and talkative. She seemed to really enjoy sipping at her Kava, even though it’s meant to be gulped. Kava is definitely an acquired taste, but she really seemed to savor her Kava, probably because, as she describes it, it’s an “adult drink.”

When I asked Katy if she had ever gulped her Kava, she looked at her mom, and very giggly said; “sometimes.”  She said that it maybe made her feel a little more giggly than usual, but that she really prefers to sip her shell with her mom.

Getting extremely technical, Germany lifted their 25 year ban on Kava, but came up with a new set of rules for prescriptions that contain Kava. Some of those rules include a maximum daily dose of 200 milligrams of kavapyrones (kavalactones). Furthermore, they recommend only taking Kava for a month at a time, and to get medical advice before starting any Kava program. Third, and most importantly to this discussion regarding the safety of Kava for kids and teens, the new lift on the ban states this: Kava-Kava-containing medicines are contraindicated in children and adolescents under 18 years.

But again, this wasn’t because of specific studies that found it was a good idea to restrict Kava intake to those 18 years of age and older. It’s a recommendation similar to most other recommendations I’ve encountered, which is that kids under 18 years of age don’t really need to be taking supplements of any kind. In fact, in a 2012 report by the American Academy of Pediatrics, there is evidence that multivitamins are actually potentially harmful to children for numerous reasons. They found that if a child has a “varied” diet, that multivitamins provide too much of what a child needs.  This includes a risk of getting too much iron, zinc, copper, selenium, folic acid, and vitamins A and C. Contrarily, children who did not eat a varied diet and who did not take a multivitamin were generally found to have low levels of vitamins D and E as well as calcium.

So, have we learned anything from this? Is Kava Safe for Children or not? It’s up to each individual parent to decide, despite the fact that this author was unable to find any specific evidence that shows children who consume Kava are at any greater risk than adults to who consume it. I did speak to one parent who gave their child Kava Root Only Capsules to help combat their anxiety, and says that despite any possible long-term effects, her child is living a much happier and anxiety-free life than she ever would have without the help of Kava. So, I feel it’s also important to assess the Big Picture value of the choices we make in relation to our kid’s health; is the very small risk of an adverse reaction outweigh the potential higher quality of life that a moderate intake of Kava has been clinically-proven to provide? Only parents can make the final decision regarding what’s right for their kids.