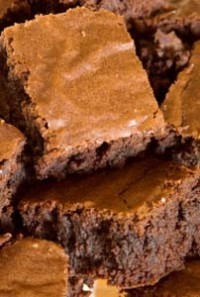 It used to be a given that kava root could not be heated past 140 degrees Fahrenheit without destroying its active kavalactones and resulting in a disappointing experience. However, culinary experiments in baking and cooking with kava have shattered this assumption, leading many chefs to create tasty recipes for kava brownies, kava sauces, kava candies and other kava-based delicacies. The thinking in the kavasseur community today is that even kava that has been heated up to 350 degrees Fahrenheit (for baked goods) can still retain a lot of its efficacy because certain types of kavalactones remain stable at high temperatures.

Kava brownies are becoming popular additions to the drinks lineup at kava bars, for those customers who want a relaxation double whammy as well as those who are still getting used to the root’s earthy taste. It turns out that chocolate and kava synergize both in terms of taste and effects: the cocoa bean (Theobroma cacao) contains the xanthines caffeine and theobromine, which has uplifting effects on mood that are quite similar to the euphoric effects of kavalactones. While caffeine is stimulating, when combined with kava in a brownie or chocolate bar, people often find that caffeine affects them less strongly. So if chocolate alone keeps you awake at night, you might be able to enjoy chocolate and kava together in the evening and still be able to have a restful sleep.

Most people find kava to have an earthy, somewhat pungent flavor by itself that can be mild or bitter depending on the specific strain of kava. Especially for kava newbies, combining it with a smooth, rich chocolate can really help you develop a taste for the root. Recipes for kava brownies often include variations that incorporate coconut, peanut butter and other nut butters, all of which can accentuate the earthy taste of kava while masking any bitterness that you may not be accustomed to.

You can find a thousand and one recipes for kava brownies out there, including convenient vegan and gluten-free preparations  and recipes that include tasty variations, such as topping your kava brownies with toasted coconut or combining the brownie mix with peanut butter or other nut butters. No matter the variation, in most kava brownie recipes you must use prepared kava brew or tea rather than the powdered root, drink mix or tincture. Although cooking times and temperatures vary, as a general rule your kava brownies will be done when the top is slightly crispy and a toothpick inserted into the center of the brownie mass comes out clean.

Now that more people are discovering the potential of baking and cooking with kava, you can usually find kava desserts and other goods being sold by online vendors and in kava bars. Besides kava brownies, two other popular items are kava chocolate and kava candies. While you can buy kava-infused chocolate from vendors, you can also make it your own home: simply melt a good quality semi-sweet or bittersweet chocolate in a double boiler, or in a small pot set inside a larger pot containing a small amount of boiling water. When the chocolate is melted, fold in a small amount of kava powder, prepared brew, or even concentrated kavalactone paste and pour the mixture into a mold (you can use an ice cube tray). Place it in the fridge for 2-4 hours and you should come out with ready-made kava chocolates! A popular kava blogger has provided a more detailed kava chocolate truffle recipe, also featuring maca and toasted coconut, that will assist you in creating the perfect romantic aphrodisiac treat.

Another new product is kava candy, which is especially convenient for those who are new to the earthy taste of kava. Even veteran kava drinkers have found kava candies a useful accompaniment to the traditional brew: many kavasseurs eat kava candy as a palate cleanser between servings of brew, and the candies are also quick and easy to take during the daytime when you’re away from your regular supply of kava, before work or on a vacation for example.

Remember that if you ingest kava in a chocolate bar, brownie or other food, it will sit in your stomach longer than a liquid, and thus it will probably take longer for you to feel the kava root’s relaxing and anxiolytic effects. It can be helpful to experiment a bit with homemade recipes for kava brownies and other desserts to decide if you like the whole idea, and to discover your favorite kava recipes. Although baked kava goods may or may not turn your mouth numb like the liquid brew, if they contain high-quality kava, a couple of kava brownies can be just as mellowing as a bowl of brew and much more versatile!