Happiest Kava in the World 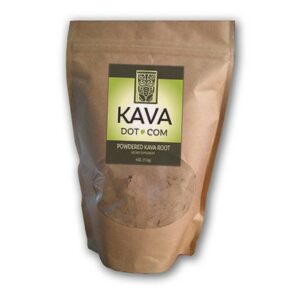 We realize that the article title is quite a bold statement, but All Kava is not created equal.  And, after many years of patience, patience, and more patience, Kava Dot Com couldn’t be more proud of their new Premium Kava variety, lovingly grown on their own farmland in Vanuatu.  This Premium Kava Root not only is a coveted Noble Vanuatu variety that consists of only lateral roots, it has a very specific “happy” chemotype that we could only have dreamed of seeing in a Kava Root.

In short, it has a proportionately higher level of Kavain, one of the key lactones thought to be responsible for the pleasurable effects of Kava (it encourages dopamine release in the brain), while conversely having a low level of yangonin, which counteracts the pleasurable effects of Kava by inhibiting dopamine release.  It’s also high in dihydokavain, which is also responsible for releasing dopamine into the bloodstream.

We already know that Kava may help to manage everyday stress as well as reduce anxiety, while supporting your overall sense of enjoyment and well-being. We feel that kava kava can be used to enhance your life, as a relaxed life may be a happier life, and this Kava is the happiest Kava we have ever encountered in our 20 years of Kava passion.

Never do we feel that this has been truer than with this lateral-root only, Vanauatu Noble Kava Kava Root.  Typically, Kava highest in kavain is the Hawaiian Kava Root, and has always been considered a very desirable “drinking ‘awa” strain.  Our personal favorite is the Mahakea cultivar, which typically has a 4-2-6 kavalactone lineup.  That means it’s high in kavain (4), dihydrokavain (2), and methysticin (6).

Our Premium Vanuatu Kava shares a similar chemotype to the Hawaiian Kava, with a 2-4-6 chemotype, making for an extremely pleasant Kava.  What’s even better, though, is that our Kava was found to have a naturally-occuring pro-biotic in the ground root material.  We’re not sure, but that might explain why, even after a long evening of imbibing, that there was virtually no nausea that has often been associated with Kava that has less desirable kavalactone lineups.  So, when we say that we feel our Premium Noble Vanuatu Lateral Only Kava Root is the happiest Kava root we have ever experienced, we don’t make that statement lightly!  We’ve tried just about every major cultivar there is, from the far reaches of Oceania, from Fiji and Vanuatu to Hawaii and even Borneo, and there were two specific cultivars that we felt stood out amongst the rest; the Vanuatu Noble Kava Root and the Mahakea Hawaiian Kava Root.

When we were deciding which of the two to carry, we realized that Kona Kava Farm already offers a Mahakea Kava Root, so we wanted to remain unique, and decided to grow the Vanuatu Noble cultivar, ensuring that the only roots used in our packages of Powdered Kava Root is from lateral roots only.

What’s more important, though, is that there is usually a VERY noticeable difference in taste between lateral-only Kava root, and root that is a blend of lateral and underground roots.  Underground roots, as one might expect, have a much “earthier” taste to the Kava.  One taste of our Kava and you will know; there is no “dirt” taste in our Kava whatsoever!

So, not only are you getting the “happiest” kava we’ve found, you’re also getting the one most caressed by the sunshine as it grew over the past 2 years!  It makes sense to us that Mother Nature would only help intensify the Kava experience, by making happy plants even happier!

Try out one of our proudest products here at Kava Dot Com today; the Premium Vanuatu Noble Powdered Kava Root.  We offer it in 4oz (125g), 8oz (250g), or 16oz (500g) packages for your convenience.  I guarantee, though, if you try just a small package, you will be back for more.  I’ve had even the most adamantly opposed to Kava instantly convert within 15 minutes after trying our new Vanuatu Happy Kava Root.