Well, we made our second foray into social media marketing with our second video on Kava for our new Kona Kava Farm YouTube Channel. We’re pretty darn proud of this video as well, and hope you enjoy Episode 01 of “Kava Classroom”. This new video series will discuss all aspects of Kava. We sometimes answer questions we’ve been asked in video form rather than just posts here on our Kava Blog.  We explain Kavalactone lineup and Kavalactone chemotypes in this one.

This first episode is called “Kavalactone Chemotypes Decoded“, and below is the embedded video:

Below is the script of the video for those who want to read along:

What is a Kavalactone? Is it a molecule? Is a Kavalactone an alkaloid or a molecule or something else entirely? The dictionary says this: “An organic compound containing an ester group –OCO– as part of a ring.

Chemical Structure: This is what Kavalactones look like to chemists: 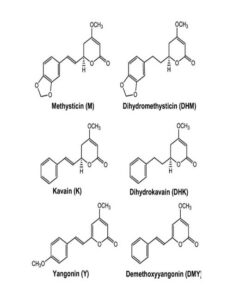 Kavalactone Lineups typically come in 3’s. For example, we might say that a Kava has a 4-2-6 lineup.  That means that Kavain is the most prominent Kavalactone in that particular cultivar of Kava. Kavain is a very happy, energizing Kavalactone, and is the favorite chemotype of everyone at Kona Kava Farm and Kava.com.

We’ve written several extensive informative articles on Kavalactones, which as of this writing, are:

Why should you care about Kavalactone lineups? Well, in all honesty, knowing a Kava’s Kavalactone lineup is often left to Kava connoisseurs. The difference between different Noble varieties, in our experience, is not that different from one Kava to the next. We have done blind taste and effect test after another over the years, and we run about 50% with people being able to correctly choose the general KAvalactone lineup of the Kava they’re drinking.

There is a noticeable difference between ISA (Tudei) Kava and most Noble varieties we’ve tried. The ISA Kava seems to often come with a 2-5-? lineup, which has 2 sedating Kavalactones first and second. So, a 4-2-6 Kava is still an energizing Kava, but a 2-5-4 Kava would definitely be a somewhat sleepy or sedating Kava. This, by the way, is also an effective aid in pain reduction for those taking Kava for pain.

There are also so many varieties/cultivars of Kava root that it might get overwhelming very quickly. Not only are there different places Kava is from, such as Hawaii, Fiji, Vanuatu Islands, Tonga, Solomon Islands, and more, there are also cultivars/varieties within each of those places. Hawaii for example has at least 13 major varieties, such as Mahakea (our personal favorite), Mo’i, Pana’ewa and others. As the ‘Awa Book states:

Kavain is the predominant kavalactone in all Hawaiian varieties, and it lays the foundation for the excellent drinking experience to be had with our varieties.

In Vanuatu, there are many quite distinct ‘awa varieties used for different purposes, and cultivars rich in these three Kavalactones are the ones used for a pleasant and fast-acting daily drink, instead of ceremonially or medicinally (Lebot and Siméoni 2004, 23).

Which variety is for you? Well, it all comes down to a matter of opinion, and what works best for you. If you’re looking for a very broad guide to go by, this is one that we use:

Most importantly, perhaps keep these basic thoughts in mind: 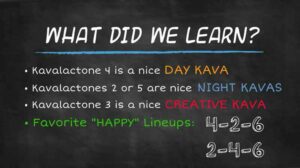 We love making videos, so keep the comments coming. Aloha & Mahalo from Team Kava and everyone at Kona Kava Farm and Kava Dot Com.