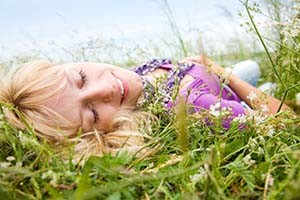 Kava is a wondrous plant which produces calm and relaxation without side effects. Unlike many prescription sleep aids, which can have all the subtlety of a freight train, kava kava’s effects are gradual in nature. Kava gives you a sleepy feeling without knocking you out and without making you “dull” and unfocused. You’ll remain alert and focused, able to think and remember clearly until you drift off into blissful sleep.

Kava has long been known to have a relaxing effect on the body, but more and more people are using kava to ease the anxieties of modern-day life. It’s no wonder that kava is many people’s preferred “night cap,” as it can calm you down and prepare you for a night of restful sleep. In fact, as long ago as 1979, modern science proved that kava’s active ingredient, kavalactones, produced drowsiness in people.

More and more doctors are even recommending that their patients take daily doses of kava as a mild sleep aid and a natural anxiety reducer. One of the great things about kava use is that it does not lose its potency over time. This simply means that if you take kava on a regular basis, you will never have to take larger doses of kava to achieve the same result. This is quite different than most sleep medications, most of which have a “build-up effect” that makes them lose their effectiveness over time. Even as they become more addictive, users have to take more to achieve the same results.

Kava has been in use for thousands of years, and despite rigorous modern-day testing, no solid evidence has proved that there are any side effects from properly prepared kava. On the other hand, there is ample evidence that supports already established knowledge that kava is a wonderful sleep supplement.

Judging by the advertisements bombarding us in the media, it’s clear that sleep (or lack of it), is a major concern for a large segment of the population. The sheer number and variety of sleep medications on the market serves as a staggering reminder that we all live in a hectic, stress-filled world which contributes to our inability to calm down and get a good night’s rest. Of all the natural sleep aides available, perhaps none are as potentially helpful as kava.

Throughout the South Pacific, restless and feverish children are given kava root (pre-chewed by their mothers), twice a day to soothe their fits of crying. Islanders employ kava as a calmative for children and adults alike, and in many kava-consuming regions it is used prior to important political and tribal meetings to promote smooth waters for negotiations and respectful observances.

Kava has been used for centuries in traditional homeopathic medicine to treat conditions such as insomnia, extreme states of anxiety, stress, excitation and exhaustion. Muscle relaxation, sleep inducing and anti-anxiety properties have been pharmacologically proven to be in the kava plant.

Kava can be used in a number of different forms as an effective sleep aid. The most common way to take kava is to prepare a kava-based drink or capsule. Check out our “Where to Buy Kava Kava” section for resources.