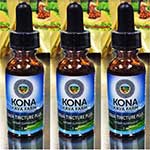 You might be wondering, what exactly is a kava kava tincture? There are so many different preparations of this versatile tranquilizing root, many of them made with high-tech processes under fancy labels, that it can be daunting just to navigate the marketplace in order to get the product you want. Although there are variations, a kava kava tincture is usually an extract of kava root into grain alcohol; this is the difference between a tincture of kava and a kava aqueous extract, in which the root’s active compounds are extracted into water, sometimes through a process called supercritical cold CO2 extraction. A fluid extraction of this type uses carbon dioxide as a solvent to extract the root’s chemical constituents: the gas is chilled to a very low temperature and placed under high pressure in an extraction chamber, so that it becomes a liquid; this liquid CO2 is then passed through the kava root material to extract its chemical constituents.

A traditional kava brew is basically an extraction of kava root’s active compounds into cold water, sometimes with a fatty liquid such as coconut milk added. However, these days you can also enjoy non-traditional liquid extractions of kava, such as a kava kava tincture, tea, aqueous extraction or kava drink mix. You might want to consider investing in a good kava kava tincture if you want a form of kava that you can take quickly and easily but that’s also more potent than a kava pill or capsule made from dried root.

The amount and range of kava constituents in a liquid kava kava tincture can vary depending on the solvent and method of extraction. Some vendors create kava extractions using both water and alcohol in order to extract a fuller spectrum of kavalactones and associated compounds. Some kavalactones are only fat soluble, which is why people often like to add fatty liquids like coconut or almond milk to traditional cold water extractions of kava root. You can also buy non-alcoholic kava kava tinctures in which the active compounds have been extracted into grapefruit extract instead.

Just like a kava pill, a kava kava tincture is a more convenient form of kava than a liquid brew or tea, one you can take on the go or when you just want a quick dose of relaxation any time of the day. Preparing a kava brew from the whole root or a powder requires time and brew tools like a large bowl and cloth strainer that you may not feel like assembling after a long day. A kava kava tincture can be just what you need for quick relief from anxiety and stress, or as a sleep aid that may act faster and be more potent than a kava pill. A tincture of kava is also typically absorbed by the body and starts working faster than a kava capsule or kava in a food form such as a brownie or chocolate, which your stomach has to digest before you start to feel the effects.

It can be tricky to estimate the amount of kavalactones in a kava tincture compared to a pill in which the amount has been measured for you. In this way, taking a kava tincture is more like taking a traditional cold brew, where the amount of kavalactones varies. How much kava tincture you take depends largely on how potent you want the effects to be, and for what purpose you want to use the tincture for; you usually would take less for an anxiolytic effect than if you were using it as an insomnia aid, for example, and recreational doses tend to be higher still. A medium dose of kava kava tincture is about 1 teaspoon or five milliliters (30-35 drops from a standard eyedropper) that you could adjust up or down depending on your desired effect. You can dissolve your kava kava tincture into a little water, juice or milk if you prefer; just remember that it can take between five to ten minutes to start working when taken as a liquid beverage, compared to a minute when taken sublingually (under the tongue).

A kava kava tincture can serve as an excellent midpoint between kava pills and a traditional cold brew or kava tea: it has all the convenience of a pill, but with a quicker onset and stronger, longer-lasting effects for the times you need them.