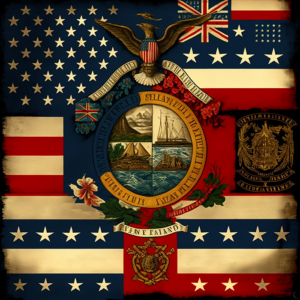 First, the geographical facts: Hawaii is an archipelago of islands located in the central Pacific Ocean. It was first settled by Polynesian explorers around AD 300. They developed a complex and diverse culture with a rich oral tradition. Kava was an integral part of that culture, as it was in Oceania for nearly 3000 years. It wasn’t until the late 18th century that the Hawaiian monarchy was established, and the islands became a hub for Pacific trade.

Then, in the 19th century, the United States began to show an interest in Hawaii as a potential strategic military and economic base. American missionaries had already established a presence in the islands. And, the American-owned sandalwood trade was a major economic force in Hawaii. The strategic and economic importance of Hawaii didn’t go unnoticed by much of the world. Despite competition from other interested countries, the United States and Hawaii signed a Reciprocity Treaty in 1875 that allowed for the free trade of certain goods between the two countries.

However, the Hawaiian monarchy resisted further American influence and sought to maintain their independence. This led to a series of political and economic conflicts, including the overthrow of the Hawaiian monarchy in 1893 by a group of American and European businessmen. This quickly led to the subsequent annexation of Hawaii as a territory of the United States in 1898.

Obviously, the annexation of Hawaii extremely unpopular with Native Hawaiians. That disdain exists, and rightly so, to this day. Even in the United States, the annexation was extremely controversial. Opponents argued that the annexation violated the principles of self-determination and was motivated by economic and strategic interests rather than genuine concern for the welfare of the Hawaiian people. That indeed stated the truth rather plainly.

Despite the opposition thuogh, the annexation of Hawaii was eventually approved by the U.S. Congress and signed into law by President William McKinley. Hawaii became a U.S. territory, and American laws and institutions were imposed on the islands. The suppression of Hawaiian culture began in earnest, including much of its native culture, including the Hawaiian language itself. In addition, Hawaii lost a great deal of its own resources to American interests as well, both political and business.

So, where does Kava Fit In?

One aspect of Hawaiian culture that has been impacted by American colonization is the traditional use of kava.  In Hawaii as throughout Oceania, kava was traditionally used in ceremonies and rituals to mark important events and to promote relaxation and social bonding. It was also used as a way to communicate with the gods and to induce a state of altered consciousness. However, kava was suppressed by the American authorities during the period of colonization and was associated with native superstition and backwardness.

In fact, the suppression of kava and other aspects of Hawaiian culture was part of a broader effort by the American authorities to assimilate the Hawaiian population and “modernize” the islands. This included the promotion of Western education and the introduction of American cultural values and practices. The Hawaiian language was banned in schools and the use of Hawaiian names was discouraged. Native Hawaiians were also subjected to discrimination and marginalization, and many were forced off their lands.

The integration of Hawaii into the United States had an irreversibly damaging impact on Hawaiian society and culture, and the legacy of colonization continues to be felt today. Native Hawaiians have struggled to reclaim their cultural heritage and assert their rights as a distinct indigenous people. There have been efforts to revitalize the Hawaiian language and to restore traditional cultural practices, including the use of kava.

In recent years, there has been a resurgence of interest in kava and its cultural significance in both Hawaii and the United States. Kava bars, which serve the drink and often provide a social space for relaxation and conversation, have become popular in Hawaii and on the mainland. Kava is also being promoted as a natural alternative to pharmaceutical drugs for the treatment of anxiety and stress.

However, the commercialization and mainstreaming of kava culture has also been met with criticism and controversy. Some Native Hawaiians and kava advocates rightfully argue that the commodification of kava disrespects its spiritual and cultural significance and profits from the exploitation of indigenous traditions. They feel that most of the resurgence in interest when it comes to kava is because it’s driven by monetary reasons, and not for a genuine interest in the plant, or the culture of kava as a whole. Selling kava drinks in bars is only one small aspect of kava, and it commodifies what was a sacred drink that bonded the entire Hawaiian culture together. From the poorest to the richest, kava was one of the universal bonds that runs through the cultures of Oceania as it has for thousands of years.

Here at KavaDotCom, we hope that our passion for this ancient plant shines through. We only buy kava that is ethically harvested by farms that pay a fair wage to their workers. We do our best to build real relationships with the farmers we buy our kava from, and try to educate others as best we can by using kava.com as both a marketplace to receive genuine noble kava root, as well as a repository of referenced articles that hopefully encourage the respectful and conscious use of a plant that has been part of our culture here for multiple generations.