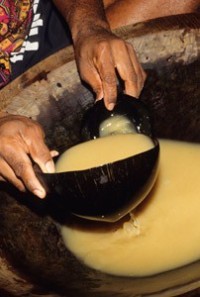 As with any herb or substance that affects the brain, kava kava should be used in moderation in a safe setting conducive to the enjoyment of this herb. However, we have not found any reports of a kava overdose in the archived studies of this plant. Overall, kava root seems to be a gentle medicine: in moderate doses, it has relaxing and anxiolytic effects similar to alcohol, but without the impairment to judgment and motor coordination that sets in even with light to moderate doses of alcohol. Furthermore, use of kava doesn’t carry the risk of intoxication or hangover, and its attendant side effects are generally mild when they occur at all.

Kava is a tranquilizing and anxiolytic herb that affects the brain in a way that causes relaxation of the central nervous system. Although a kava overdose is relatively unheard of, in large amounts kava can still impair your motor coordination and reaction times, which is why we recommend that you refrain from driving and other activities that demand fast reflexes and coordination after drinking kava. You wouldn’t want to drive after taking kava any more than you would after drinking alcohol. Since kava is also a muscle relaxant, the best way to take kava is probably in a calm, quiet environment that doesn’t put physical demands on you. The nice part is that even as it relaxes you, kava leaves your ability to think and carry on a conversation intact, making it a great beverage for social occasions!

Even among long-term users of kava in the South Pacific, there has never been a reported incidence of an overdose of kava. However, heavy long-term use of kava does carry some potential side effects: the most well-known is a scaly skin condition called kava dermopathy, which isn’t harmful and goes away when a person stops or greatly reduces their excessive use of kava. Some other undesirable effects of heavy kava use include shortness of breath, reddened eyes, and slight alteration in red blood cell and platelet levels. Especially in sensitive users or those naïve to kava, gastrointestinal upset can also sometimes occur. Taking kava in combination with alcohol or tranquilizing drugs may enhance kava’s sedating effects, and probably isn’t a good idea because it can place a larger metabolic load on the liver.

But these potential side effects have only been known to occur when well over 1,000mg of Kavalactone (not Kava powder) is consumed every day over a long period of time.  So, no casual Kava user ever needs to fret.

Because kava is a natural herb with a range of active constituents rather than a drug with a single active chemical, it can be tricky to determine an appropriate dose of kava. In general, two things determine the proper dose range of kava for you. The first is the purpose for which you want to use kava: a smaller dose of kavalactones is required for anxiety or insomnia relief than for recreational use. Though guidelines vary, most sources we’ve looked at recommend an approximate dose of between 60 and 150 milligrams of kavalactones for an anxiolytic effect, and between 70 and 210 milligrams to support restful sleep. At the small doses used for anxiety relief, studies have shown that kava calms subjects without making them drowsy, and may also improve concentration and performance on standardized tests. If you’re taking kava as a sleep aid, it works best when consumed two to three hours before bed.

Of course, these dose guidelines assume that you know the amount of kavalactones in the preparation of kava you’re using. While kava tinctures and capsules will often list the average amount of kavalactones in milligrams, it’s more difficult to estimate the amount of kavalactones in a traditional liquid brew, kava tea or paste. Different forms of kava, including the whole fresh or dried root, a powdered drink mix, tincture, pill, or concentrated kavalactone paste will all contain different amounts of kavalactones. To ensure that you have a pleasant and effective kava experience when using any form of kava root, it’s probably best to follow the dose guidelines set out by the vendor from whom you buy your kava. A serving of kava brew is usually about four to eight ounces, but this varies depending on the form and variety of kava.

Per four-ounce serving, a traditional cold kava brew made from fresh or dried root can contain anywhere from 150 to 500 milligrams of kavalactones depending on the varietal of kava, the method of preparation, and how long the root has been allowed to steep. And though we wouldn’t use the term kava overdose as such, it is possible that taking a large dose, especially when you’re naïve to kava, can result in overly sedating effects that you may not want. Like any herb, it’s important to start small with kava the first few times you try it; once you become familiar with how kava makes you feel, you can gently increase your dosage. If you’re taking more than one bowl of kava, wait an hour or so between bowls to give the kava a chance to metabolize through your body.

Most importantly, no matter what form of kava you’re taking, stop and wait a bit after you feel sufficiently relaxed. Kava’s effects usually last a few hours, so you may not feel the need to take any more after your first dose. Use kava in moderation and respect, and we feel confident you’ll come to enjoy its healing and tranquilizing effects both as a medicine and an accompaniment to a relaxing evening.