How to Make Kava 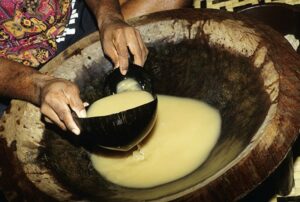 You might wonder, “Why go to the trouble of learning how to make kava?” After all, there are plenty of vendors out there offering ready-made kava products in almost every conceivable form: pills, capsules, tinctures, powders and drink mixes. In comparison to popping a kava capsule or mixing a little kava tincture into water, the process of making kava is a little bit more involved. However, there are some tangible benefits to figuring out how to make kava from scratch ingredients that make it a good choice for serious kava aficionados.

First of all, by brewing your own kava, you’ll know you’re getting a pure product and the root that will probably be much fresher (and more potent) than many of the kava products found in health food stores. Buying pills or tinctures of kava requires you to put your trust in the seller as to whether you’re getting a fresh, viable kava product that will produce tangible effects. Many commercial preparations of kava in pill or tincture form often contain lower amounts of kavalactones than are needed for an effect—including therapeutic effects like anxiety reduction. The average concentration of kavalactones in a tablet is around 60-150 mg, but most studies regarding kava’s medicinal benefits state that 70 to 210 mg are necessary for an anxiolytic effect, and 150 to 200 mg are needed to relieve insomnia. These commercial doses are frequently lower than the concentration of kavalactones found in a traditional kava brew.

Then there’s the perennial question of kava and liver safety: some alarms were raised in the early 2000’s that kava use might be linked to liver damage based on a German study. While these claims have been debunked it underscores the importance of sourcing the purest, freshest kava root you can as a consumer. Many of the kava products tested in the study that seemed to have detrimental effects on the liver had either been produced using chemical solvents that leached into the final product, or contained traces of the kava plant’s stems and leaves, which are known to have damaging effects on the liver. Today, any kava vendor worthy of the name will guarantee that their products are made using only kava root, but why not sidestep the whole question of purity and extraction methods by making your kava brew at home?

There are a couple easy ways to make kava from scratch. If you buy the whole root, you’ll need to use a blender to grind it into a powder. Alternatively, you can buy pre-powdered kava root from most vendors. Traditionally, South Pacific peoples would chew kava roots to help extract their kavalactones and other compounds, then leave the roots to soak in cold water for several hours. However, you can speed up this process (and skip the addition of saliva) by using powdered root. If you’re making brew for several people, you may want to use a blender to mix the ingredients. Add about 1 tablespoon of ground kava root per 1 cup of water, and let the mixture steep for about 45 minutes to an hour; you can also use milk or another fatty liquid as a solvent. The longer you steep your kava root, the stronger the resulting brew will be. Once you judge your brew to be sufficiently potent, you can use a cheesecloth, muslin bag, or even an old shirt to strain the root powder from your brew, emptying the liquid into another glass or carafe. Coffee filters tend not to work for straining kava.

Alternatively, you can place your ground kava root into a muslin bag or a square of cloth in a shallow bowl of water. Wrap the ground root in your cloth, taking care not to let any root material escape into the water, and knead the root mass through the cloth until you see an opaque juice filtering through the bundle into the water. This method of steeping will express the kava root’s active compounds into the water in much the same way that the South Pacific tradition of chewing the kava pulp before immersing it seems to.

More modern ways to make kava involve heating the root powder, either by steeping it in hot water or incorporating it into baked goods. Up until quite recently, most people believed that heating kava beyond a low temperature would destroy the plant’s active kavalactones and thus its potency. However, it turns out that if you’re careful to heat kava for only short periods of time at measured temperatures, many of the plant’s more heat-stable kavalactones survive. Thus, by monitoring the temperature, you can successfully bake with kava and make kava tea that preserves all of the plant’s relaxing and anxiolytic effects!

In making kava tea, we recommend you use the loose kava powder rather than a tea bag; that way, the root will probably be fresher and can swirl around freely in your mug, which makes for more effective steeping. Make sure to heat the kava no more than 140 degrees Fahrenheit; 120 degrees Fahrenheit is considered the ideal temperature for kava tea. Use a kitchen thermometer to measure the temperature of your tea. Those of us who have tried baking with kava recommend heating kava root to no more than 210-220 degrees Fahrenheit, for about 5 minutes at a time. If you follow these guidelines, your finished kava dessert will be just as potent as a cold brew, and some people say that baking kava for brief periods of time even increases potency.

Kava is a versatile plant that can be consumed a number of different ways. Whether you’re a novice to the whole idea of kava, or an accomplished “kavasseur” who has sampled brews from all over the South Pacific, we hope this guide has given you some ideas about how to make kava that’s potent, fresh, and enjoyable to any palette!