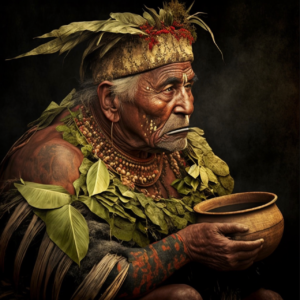 The tradition of chewing kava roots to prepare for drinking is an ancient practice that has been used by many Polynesian and Melanesian cultures for thousands of years. The process of chewing kava roots is known as “tudei” in some languages, and it is considered to be a traditional and sacred method of preparing the kava beverage.

The process begins with selecting mature kava roots, which are then cleaned, peeled and cut into small pieces. These pieces are then chewed by one or more people, typically men, until the fibers are broken down and the juices are released. The chewed kava is then spit into a container, where it is mixed with water or coconut milk. The mixture is then strained to separate the liquid, which is then consumed as the kava beverage.

The act of chewing kava is believed to have spiritual significance, as the kava chief or the person who chews the kava is seen as a conduit between the community and the gods. The kava chief is also responsible for interpreting the messages received during the ceremony. The tradition of chewing kava is also believed to enhance the quality of the kava and increase its potency, as the enzymes in the saliva help to break down the kavalactones, the compounds responsible for the psychoactive effects of kava.

It’s worth noting that the tradition of chewing kava roots to prepare for drinking is not practiced in all cultures of Polynesia and Melanesia, and some cultures have adopted other methods of preparing the kava beverage, such as grating or pounding the root or using instant kava powder.

In ancient Polynesia, kava was consumed primarily during religious ceremonies and rituals, and the ceremony itself was considered to be a sacred event. The ceremony was typically led by a kava chief, who was responsible for preparing and serving the kava, and interpreting the messages from the gods and ancestors that were believed to be communicated through the kava.

The kava ceremony would typically begin with a prayer or chant, and the kava chief would then prepare the kava by chewing, grating or pounding the root and mixing it with water or coconut milk. The kava beverage would then be served to the participants, who would consume it in a specific order, usually starting with the highest-ranking members of the community or the chief.

During the ceremony, participants would sit in a circle, often on mats or on the ground, and engage in conversation, storytelling, singing and dancing.

The kava ceremony was also a time for building and strengthening relationships between community members, and between different communities.

The kava ceremony was considered to have powerful spiritual properties, and it was believed to allow participants to connect with the gods and ancestors. It was also believed to have healing properties for a variety of ailments, such as insomnia, headaches and stress. Kava was consumed in different forms, including chewable root, mixed with coconut milk and consumed as a drink, and used as a paste applied to the skin.

It’s worth noting that the customs and traditions of the kava ceremony varied among the different cultures of Polynesia and Melanesia, and the specifics of the ceremony and its significance may differ between cultures and regions.

Some references that can provide more information on the tradition of chewing kava roots are:

These references provide detailed information on the history, traditional uses and cultural significance of kava in various Polynesian and Melanesian cultures, as well as the methods of preparing and consuming kava, including the tradition of chewing kava roots. However, it’s important to note that the information in these references may be more focused on certain cultures or regions, and it’s always best to consult multiple sources when researching a topic.