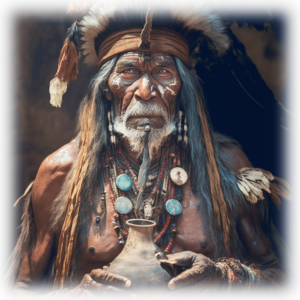 There is one mythological tale regarding the origin of Kava that I liked the most. I found it in an article in the Journal of the Polynesian Society entitled; “Kava in Vanuatu: A Study of the Cultural Significance of a Plant in a Traditional Society” by K. E. Palmer:

According to this legend, the first kava plant was created by the god of agriculture; Qat.

Qat grew concerned that the people of Vanuatu were not able to grow enough food to sustain themselves. So he decided to create a new plant that would be easy to grow and would provide a source of nourishment for the people.

Qat went to a sacred cave in the mountains where he searched for a suitable root to use for his new plant. After many days of searching, he found a small, unassuming root that seemed perfect for his purpose. He took the root and planted it in a special garden near the cave.

The root quickly grew into a large, lush plant with green leaves and a thick stem. Qat was pleased with his creation and decided to share it with the people of Vanuatu. He called the plant “kava” and taught the people how to cultivate it and prepare the root for consumption.

Qat gave instructions to the people on how to chew it and then mix it with water. The drink made from the root was believed to have a calming effect and to be able to bring people together. Kava then became an important part of social and ceremonial events from then onward.

Qat also taught the people how to plant and care for the kava plants. He taught them how to make different varieties of kava depending on the occasion. He emphasized the importance of maintaining the purity of the kava plant. He warned that if the plant was allowed to become impure, it would lose its power and the people would no longer benefit from it.

The people of Vanuatu followed Qat’s instructions and kava became an important part of their culture and traditions. They used it to mark important events such as weddings, births, and deaths, and it played a central role in many of their ceremonies and rituals. The legend passed down through generations and kava remains an important part of Vanuatu’s culture today. It continues to be used for ceremonial and medicinal purposes, and it is believed that it has the power to bring people together and to create a sense of community and harmony.[1]

The story might differ depending on the island or the source, but the main idea and the role of Kava in the Vanuatu culture remain the same.

Despite this legend, the exact origins of kava are not known.

But, it is believed to have been first cultivated in Vanuatu and other islands in the Pacific around 3,000 years ago. There are several theories about how kava spread to other Pacific island groups. One theory is that Austronesian-speaking people who migrated to the Pacific islands brought kava with them. Another theory is that kava was independently domesticated in different parts of the Pacific.

Trade also played a significant role in spreading kava. The Pacific islanders were known to engage in inter-island trade, and kava was likely traded as a valuable commodity. The root was dried, powdered and stored in coconut shells, making it easy to transport and trade. The Pacific islanders were skilled navigators and traders, and they traveled by canoe to other islands in the Pacific, taking kava with them.

For example, when the Lapita people, who are considered the ancestors of many of the present-day Pacific islanders settled in Vanuatu, they likely brought kava with them and introduced it to the local population.

The Lapita people were a prehistoric Austronesian-speaking culture that lived in the Pacific islands between around 1600 BCE and 500 BCE. They are considered the ancestors of many of the present-day Pacific islanders, including the Polynesians, Micronesians, and Melanesians.

Lapita culture is known for its pottery, which is characterized by intricate geometric designs. They also had advanced seafaring and navigational skills, which they used to settle many of the islands in the Pacific, including Vanuatu, Fiji, Samoa, and Tonga.

The relationship between the Lapita people and kava is not well-documented in the archaeological record, but it is believed that the Lapita people were familiar with the plant and may have used it in their rituals and ceremonies.

Archaeological evidence suggests that the Lapita people were familiar with other plants and crops that are native to the Pacific, such as yams and taro, which would have been important for their survival. It is likely that they also brought kava with them when they migrated to different islands, and introduced it to the local population.

It is worth mentioning that the Lapita culture predates the earliest known evidence of kava use by several centuries, so it is uncertain if they were the ones who first introduced Kava to the Pacific islands. Regardless, they are considered to be the first known human inhabitants of Remote Oceania, including the Bismarck Archipelago, the Solomon Islands, Vanuatu, New Caledonia and Fiji, as well as parts of Samoa and Tonga.

Archaeological evidence suggests that the Lapita people were also skilled in agriculture and were able to adapt to different environments, which allowed them to settle in a wide range of islands. They likely brought with them plants and animals that they had domesticated on their home islands, such as pigs and chickens, as well as mentioned above; yams, taro and Kava.

The fate of the Lapita people is not entirely known. It is believed that they eventually assimilated into the local population and their culture and traditions eventually became part of the indigenous culture. It is worth noting that the Lapita culture had a significant impact on the Pacific islands, as it laid the foundations for the development of the later Polynesian and Melanesian cultures, which developed from Lapita’s descendants.

Kava ceremonies were typically led by a chief or other high-ranking member of the community, and were attended by both men and women.

Kava cultivation was an important aspect of traditional Pacific agriculture, and the plant was typically grown in dedicated kava gardens. The plants were propagated through root cuttings, and the root was typically harvested several years after planting. The process of preparing the root for consumption was labor-intensive and typically performed by women.

In many Pacific cultures, the use of kava was also associated with traditional stories and myths. One of my favorite myths is the one from Vanuatu at the top of this article.

The process of preparing the kava root for consumption is known as “pounding” or “chewing” and it is typically done by women. The traditional method involves cleaning and washing the kava root, then it is peeled and the outer layer of the root is removed. The root is then cut into small pieces and pounded or chewed by women to break down the fibers and release the active compounds.

The kava root is traditionally pounded using a wooden mortar and pestle, or sometimes it is chewed by women and the saliva mixed with root fibers is spit into a container. The resulting liquid is then mixed with water and strained to remove any remaining root fibers. The liquid is then ready to be consumed as a mildly narcotic beverage.

The effects of kava were considered to be both relaxing and euphoric at the same time.

The preparation method can vary depending on the region and culture. Some societies use specific tools and utensils to pound kava and some use specific rituals to prepare the kava.

It is worth mentioning that due to the labor-intensive nature of the traditional preparation method and the increasing demand for kava, in recent years, many Pacific island nations have begun using mechanical grinders and other modern equipment to prepare kava root. Also, some societies have started to use the dried root powder instead of freshly pounded root, which is mixed with water to make the drink.

In ancient Polynesia and Micronesia, Kava plant was also used for a variety of medicinal purposes. The root of the plant was believed to have healing properties and was used to treat a range of ailments including stomach pain, headaches, and skin conditions. It was also used to help with sleep and as a pain reliever.

Furthermore, in some societies, the Kava plant was also used for other ritual activities, for example, in Vanuatu and Fiji, the Kava root is also used as a form of currency in trade and other transactions.