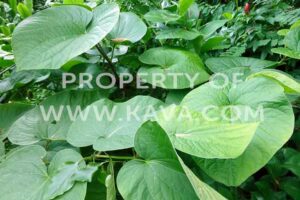 Habitat: terrestrial, usually grow in a shady, damp area. Best grown on the mountains in Pohnpei, but is native to many Pacific Ocean islands. The rhizomes (underground roots) and the lateral roots are used in modern herbal preparations.

The kava plant, also known as Piper methysticum, grows in tropical areas and requires adequate shade and moist conditions to flourish. Known to grow best along the mountains of Pohnpei, kava is now considered a native plant to many Pacific Ocean islands. However, kava’s exact country of origin is unknown. This fact aside, the Republic of Vanuatu is widely recognized as the “home” of kava because it hosts the largest number of cultivars.

Since all of kava’s cultivars are sterile, the plant can only spread through direct human involvement and action. Female flowers are especially rare and do not produce fruit even when hand-pollinated. Its propagation is entirely due to man’s efforts by methods of striking. There are several cultivars of kava, with varying concentrations of both primary and secondary psychoactive substances. The rhizome (or rootstock) is used in modern herbal preparations, and contains the most potent of kava’s psychoactive constituents.

The kava plant has historically been grown in the Pacific islands of Hawaii, the Federated States of Micronesia, Vanuatu, Fiji, the Samoas and Tonga. Since WWII, it has also been grown in the Solomon Islands, but most kava used in that region is imported. Kava is a cash crop in Vanuatu and Fiji. Twenty-one varieties of kava are recognized on the Marquesas Islands. Tahiti has fourteen known varieties and Vanuatu has been reported to have more than seventy-two. Vanuatu also claims numerous, recent discoveries of completely new and previously unknown strains of kava.

Kava is an evergreen shrub that thrives in well-drained soil and grows well as an understory crop (i.e., too much sunlight, especially in early growth, is deleterious). It grows naturally where rainfall is plentiful with over 2,000 millimeters, or close to 80-inches per year. Ideal growing conditions range from temperatures of twenty to thirty-five degrees Celsius, or sixty-eight to ninety-five degrees Fahrenheit, with an optimum 70% to 100% relative humidity. The soil is kept loose to ensure plenty of air reaches the root. This keeps the roots healthy, for if their environment is too wet, the plants will develop root rot and have to be destroyed.

Its light green, heart-shaped leaves grow alternately down the length of branches in groupings of ten to thirteen from the base of the stalk, which are approximately thirty centimeters, or about twelve inches long. Their stems have green, swollen nodes that can reach up to ten inches in length. The male flowers sprout up in solitary, auxiliary, greenish white spikes up to six inches long. The flowers rise up from axils positioned opposite the leaves. Female flowers are virtually unknown, and the kava plant has never been known to reproduce via conventional means. The fruits are berries that contain one seed. Nothing but the root should be used in kava preparations for human consumption, since the tops of the plants have been shown to be toxic to the liver, while the roots have been used and proven safe over thousands of years.

The kava plant is propagated from cuttings taken from the lower stems or from the younger stems once separated from the rootstock when the root is harvested. Traditionally, kava plants were not harvested until they were around 4 years of age, as older plants have higher concentrations of kavalactones, one of the main active constituents in kava. However, over the past two decades farmers have been harvesting younger and younger plants–even as young as eighteen months. Older plants are not much taller than younger plants; growth adds diameter to the culm and additional stalks, as opposed to height. A fully grown plant’s roots can reach up to 60 centimeters, or two feet, in depth.

When most people refer to kava, they are actually referring to the root of the kava plant. It is the kava root where the most potent active ingredients such as kavalactones lie, and the highest quality kava extract will only utilize pure kava root. You want to steer clear of kava that utilizes stems and peelings, as they are not safe for humans, and have been linked to major heath concerns.

The kavalactones, sometimes referred to as kava-pyrones, are the most important alkaloids in kava extracts. High-quality kava rhizome contains 5.5–8.3% kavalactones. Medicinal extracts used in Europe contain 30–70% kavalactones. In traditional homeopathic medicine, kava root is used to treat such conditions as extreme states of excitation and exhaustion.

Muscle relaxation, analgesic and local anesthetic properties, anti-anxiety and anticonvulsant effects, as well as sleep inducement have all been pharmacologically demonstrated in the kava roots, depending on the preparation, dosage and delivery method. Some researchers speculate that kava may directly influence the limbic system, the ancient part of the brain associated with emotions and other brain activities. Kava is a unique anti-anxiety alternative because it does not seem to impair reaction time or alertness when used in proper dosage amounts.

On Pohnpei, the leaf of the sakau (a very rare, prized strain of the kava plant) is used to stop the bleeding of wounds. Natives pound or squeeze the leaf until the liquid comes out, then they drip juice on the cut. They then cover the wound with a sakau leaf and tie the leaf on in order to protect the wound.

Sakau is so special on the isle of Pohnpei that it is considered the only thing which can turn aside the wrath of a king. Sakau calms things down. If offered sakau, the king or any other person to whom it is offered must accept. Such as, if you go to ask for permission to marry and the woman’s family does not agree with you marrying her, take sakau to the father, pound it, and offer him the cup. He must take the cup, it would be shameful to not accept the offer of sakau.

All across the Pacific Islands, kava root is used in a ceremonial fashion, a practice that dates back thousands of years. Today in Hawaii, Fiji, Samoa and Vanuatu, drinking kava functions as a greeting for guests, as a component of tribal negotiations, and as part of social evening get-togethers. Many famous dignitaries and celebrities partake of kava, and kava ceremonies are a common place event in the South Pacific at political summits, sporting events, arts festivals and even with every day folk just wanting to unwind at the end of their busy day.

For a complete discussion about Kava in Mythology and the History of Kava, simply click these links or look to the menubar on the right for lots of Kava articles.